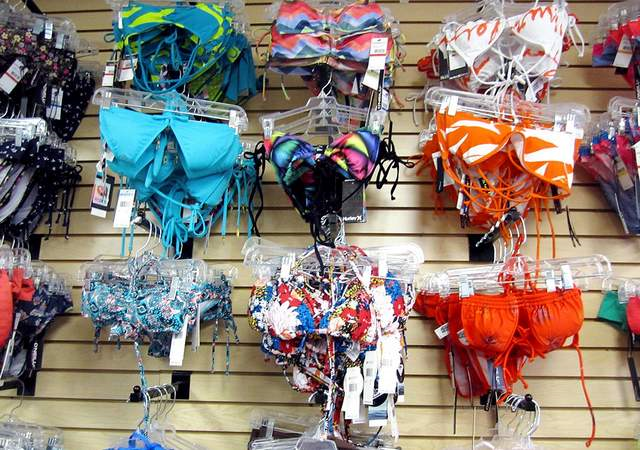 When I was a little girl, my mother, who at the time, I thought was the most unfair, vindictive, Amish mother in the world, made me wear very modest swimsuits. You know the ones. Not just one-piece, but one piece with a skirt. A skirt! Oh, the injustice! Oh, the stifling of my personal expression! While my tiny little friends sashayed around the beach and pool in their adorable bikinis, I was billowing around in my layers of body-covering rayon, so very aware of my too-tall frame among such petite lovelies.

Oh, mom. I am so sorry. Sorry for saving up my money and secretly purchasing those hideously neon bikinis from the clearance rack. Sorry for shoving them deep down in the recesses of my sock drawer, or once you caught on to that, between my fitted sheet and the mattress pad (the only hiding place for anything I might have slipped past you). I am sorry for leaving the house in my rayon swim-burka, only to hastily change into a bikini when I got to the pool. I totally, 100% get it now.

Do I think there is anything inherently wrong with wearing a (respectably cut) bikini? No. It’s a hot topic among Christian women, and I see both sides of the debate, but no. I do not. In fact, throughout my college years, I competed in the Miss America pageant system wearing a modestly cut, body-flattering bikini and was completely at ease doing it. The whole point of the swimsuit competition (the original point, y’all. Not the media-sensationalized point) is fitness. It’s called the “Physical Fitness in Swimsuit” competition. It’s designed to show that a young woman competing for the title of Miss Indiana/Miss America/Miss Whatever is the whole package. The brains to rock an interview chock full of current events, the talent to captivate the audience with a well-done performance, and also the desire and ability to be physically fit and invested in her health. Finding time to go to the gym and eat healthy is not easy, right?

Bikinis weren’t required in the swimsuit competition. I could have worn a one-piece. Truthfully, I wore a bikini simply because my abs were sick, you guys. Two babies later, I can say that without any ego, because my abs are no longer sick (in that sense, anyway). I look at those photos from the glory days of my mid-section, and it’s like looking at a younger, hotter long-lost cousin. I have mixed feelings of admiration and hate for the girl in that picture. I totally underappreciated the tummy of my youth–my goose that laid the golden egg of scholarship money.

Oh, stop. I can hear you gasping in horror.

Anyway, back to life now. So my daughter, a fashionista at the tender age of 6, desperately wants me to let her wear a bikini, and I will not do it. I will not. We’re at the stage where she won’t wear the tutu one-pieces anymore, so I have acquiesced to the tankini. It covers everything a one piece covers but comes in two pieces. Easier to pee. What’s not to love?

My little girl, however, still so young by the measurement of years, but so mature in appearance and intellect, thinks I’m terribly unjust for refusing to let her wear anything less covering than her tankinis.

“Why can’t I wear a bikini? They even make them for two-year-olds, Mommy.”

“I know, but I wouldn’t let my two-year-old wear one either.”

“You wear one sometimes.”

“I know, but I’m a grownup. I don’t want creepy people looking at your body.”

“Do you want creepy people looking at your body?”

Well…shoot. Swift shut down from a 2nd grader.

My sweet little girl is growing up so fast. Her physical development is one step ahead of her emotional development. I experienced the same tug-of-war at her age. Navigating a body that changes so quickly, you hardly recognize it day to day, while your brain bounces between wanting to watch cartoons and wanting to catch up to your body. I remember knowing I wanted to wear a bikini and makeup and high heels and perfume, but not knowing why I wanted to. It’s an odd instinctual pull, the desire to embrace the idea of womanhood while you’re still only a child. I grieve a bit for the little-girl-me and the fight she had to navigate those strange emotions. People look at you differently and make comments about you that seem vaguely uncomfortable to your young brain, but you’re not exactly sure where the discomfort lies or why. 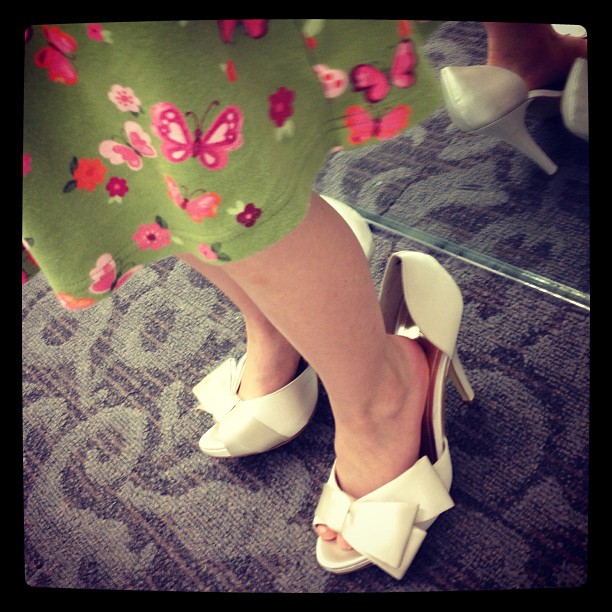 Yes, knowing Jesus helps–but at that age, there’s something a little weird about being like “Hey, Lord? Why are my hips wider than all my friends’? Also, I held hands with a boy while I was roller skating, and I didn’t hate it. What’s going on? Boys are gross, Lord. You made them. You know this. What’s happening to me?” We are free to come to Him with anything and He deeply cares about all of it, but still– I can’t help but imagine Him fielding some of my more angsty prayers back then with His hands over His ears going “Lalalalalalala! I can’t heeeeeeear yoooooou!”

I am holding on to my daughter’s innocence with white knuckles. I am not going to let go. I will protect her for as long as I can from the sideways glances, the comments that are callously made within her earshot, and most of all from a society that wants her to desire bikinis and boyfriends long before her tender heart is equipped for any of it. In hindsight, I am grateful for the struggles I had as an “early bloomer” and the perspective it gives me on how to pray for and talk to my precious daughter. I can still feel the same awkwardness of growing up as if 1987 were just yesterday.

We’ve got this, my sweet girl.

I stand by my statement that bikinis don’t ooze sinfulness just because the hem of the top piece doesn’t meet the hem of the bottom piece. I will stand just as firmly, however on the fact that my tall, curvy, lovely daughter doesn’t need the masses at the pool to be privy to this vulnerable time of growing up while she’s trying to figure it all out. That’s just where we are.

She might be six, going on 16, but she’s my baby. Please treat her as such, World, or I will cut you.

Suffice it to say, my collection of bikinis has since been boxed up. Tankinis, here I come. I draw the line at anything with a skirt, though.

A girl has her limits.